...Then on Friday, August 26th in Kansas City; and Saturday and Sunday in the KC and Lawrence, KS area. Stay tuned to this page for details. 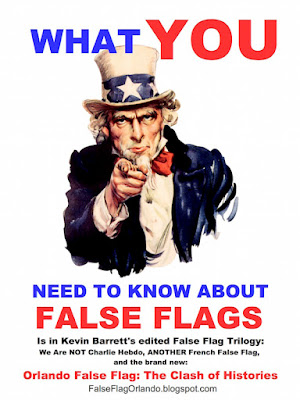 What is a “false flag”? How does this expression relate to the recent terror attacks in Orlando, Dallas, Nice…and before that, Paris and Brussels?
Kevin Barrett, called “THE top analyst for false flags” by former CIA Clandestine Services officer Robert David Steele, will explain how, as he puts it, “false flag awareness can save the world.”
“Mr. Barrett’s views . . . have outraged some Wisconsin legislators and generated a fierce debate about academic freedom.” – The New York Times
Barrett “never expected to find himself carrying the banner for one of the most controversial theories of our times.” – Chicago Tribune
“Kevin Barrett is to be applauded for Orlando False Flag his latest instant anthology false flag exposé. It presents a variety of sometimes clashing views. As such it’s an example of much-needed radical informational democracy in print devoted once again to the key challenge of our time: vast manipulative deception by the American Empire.” – Barrie Zwicker, author of Towers of Deception: The Media Cover-up of 9/11
Kevin Barrett should be “in the Charles River floating down towards the harbor.” Bill O’Reilly, Fox News commentator

We Are NOT Charlie Hebdo


Posted by Kevin Barrett at 3:20 PM No comments:

Kevin Barrett
I'm the author of Questioning the War on Terror: A Primer for Obama Voters; Truth Jihad; A Guide to Mysterious San Francisco; and editor of 9/11 and American Empire v.2, and have taught Arabic, Islamic Studies, French, American Civilization and others subjects. Widely regarded as the world's leading Muslim 9/11 truth activist (for what that's worth) I spent 2006-2008 as the only talk show host featured on all three leading patriot radio networks (GCN, RBN, and WTPRN). I ran for Congress in Wisconsin's 3rd District in 2008: http://www.barrettforcongress.us Currently I'm working on a couple of book projects...